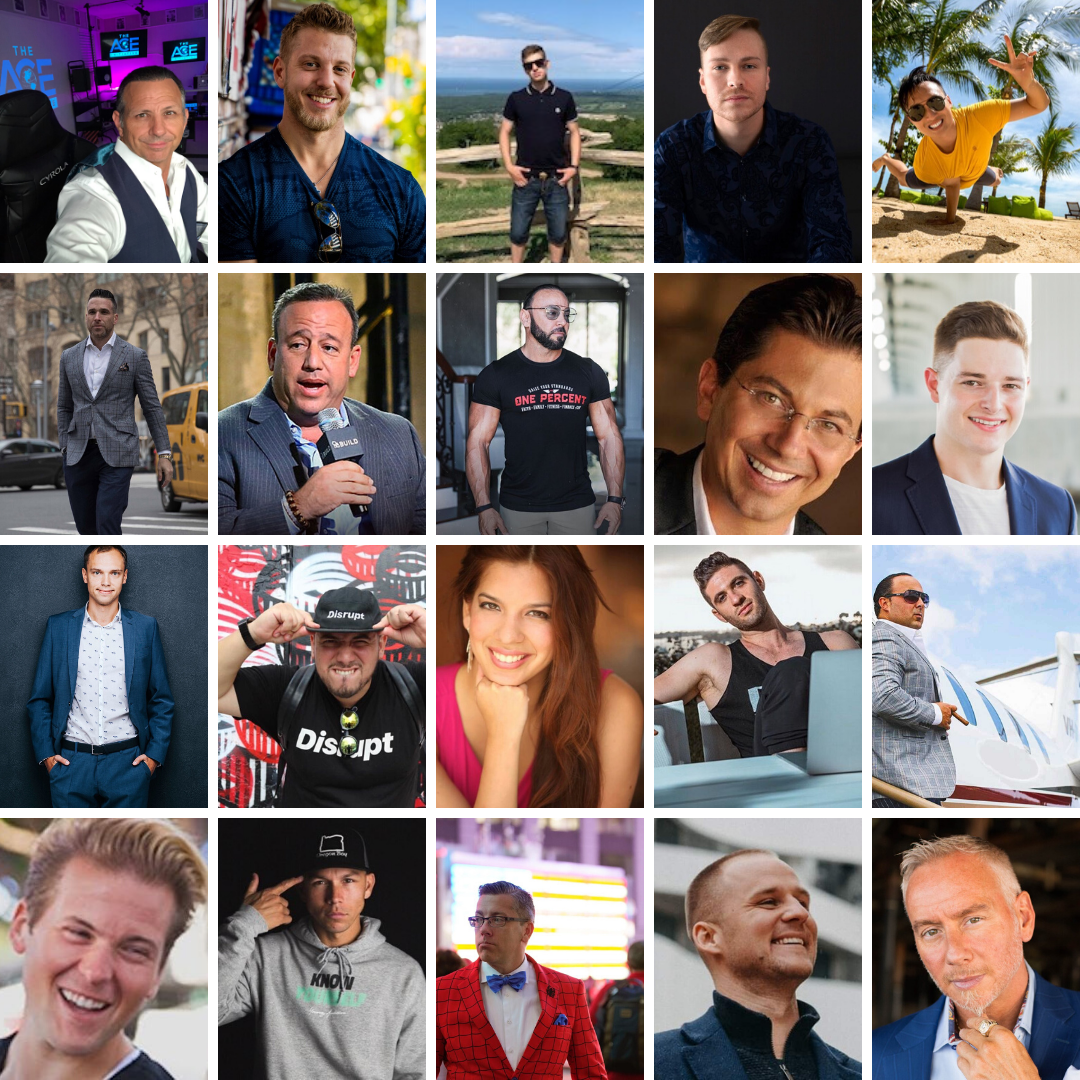 SAN JUAN, PUERTO RICO / ACCESSWIRE / January 2, 2020 / Starting a business and making it successful is never an easy task. You have to go through some significant challenges that may seem impossible to overcome, which is why most fail at it. However, some people thrive in their businesses and end up providing sources of inspiration to many others. Most top entrepreneurs have a sad background, but the fact that they overcame all of their struggles to make it big in their respective industries is admirable.

This year, Disrupt Media put together a list of what they consider to be some of the top entrepreneurs to watch in 2020. There are a lot of top entrepreneurs in the game right now, but here are the top ones that Disrupt picked who will most likely continue to create an impact in 2020 and beyond:

As one of the well-known Success and Transformational coaches across the world, Jacob Galea has built a great name and business. He is one of the most reputable life coaches, and he has worked with a lot of people, including celebrities and other business owners. Jacob Galea has invested in education just as much as he has invested in his business. He learned about psychology and martial arts, and he uses the knowledge he got from them in addition to his passion for helping as many people as he can. He is one of the entrepreneurs who have proven that you can achieve anything if you set your mind on it, and he teaches others to do the same. Jacob Galea has coached thousands of people and gives inspirational speeches in several forums across the world.

Paul Getter is a self-proclaimed digital marketing nerd, and it’s safe to say that the title fits him perfectly. He is one of the entrepreneurs that overcame a lot of challenges growing up to prove that he could build a good life for himself. Paul ventured into the marketing world after losing his job and without any prior knowledge on the subject. His dedication and passion are what drove him to learn digital marketing, and within a few years, he has become one of the most reputable entrepreneurs in the industry. His level of expertise in digital marketing and his passion for helping others is what makes Paul Getter one of the top 20 entrepreneurs to look out for in 2020. He has built a strong network with most people still seeking his assistance with digital marketing. He has already helped many people take their businesses to the next level. Paul still spends millions of dollars on his clients yearly, and he isn’t showing signs of slowing down.

David Meltzer is one of the entrepreneurs who has already built a fortune. David now uses that experience and expertise to help other people who are interested in transforming their businesses. He focuses on one of the most important aspects of any business, which is consultation. He provides a different approach to businesses in various industries, and that is one of the reasons why he has built a good reputation. David has expertise in various business areas ranging from fundraising and strategies to marketing and brand building.

Stephen Campolo is a fitness expert, influencer, and muscle-building machine. Stephen went from overweight to fit and is now teaching others his secrets. With his many online courses and social media content, he has helped thousands of people get their dream bodies. Stephen is also the Founder of the 12-week transformation challenge.

Zach Benson, a full-time entrepreneur, world traveler, dancer, and owner of Assistagram, has used Instagram to get sponsorships, travel the world for free, and generate leads for his business. His Instagram account is filled with content from his worldwide adventures which results in a unique and interesting page.

Kustas Kirsipuu is a serial entrepreneur and cryptocurrency investor from a small village in Estonia. Kustas has worked with world-class influencers including Eric Worre and he is widely known as a leader in the business community for his work in network marketing, scaling multiple 7-8 figure businesses and training young entrepreneurs to reach their goals and create financial freedom.

Dallas Basha is a real estate developer, philanthropist, and national speaker. He is the Founder and CEO of Basha Real Estate and is committed to changing how communities connect. Every day he becomes closer and closer to changing the Real Estate industry for the better.

Tony Delgado is a serial entrepreneur, internet personality and philanthropist who is mostly known for his work in Puerto Rico’s Entrepreneur & Startup ecosystem. Tony is the mastermind behind many of the most successful brands. Tony has collaborated with influencers like Tai Lopez, Gerard Adams, John Mallot, Casey Adams, Jason Capital, and Charlie Rocket and worked with brands like Armani, Steve Madden, Marvel Comics and K-Swiss. Tony is also the host of the Disrupt Podcast where he interviews the most disruptive entrepreneurs, leaders, and change-makers in the world.

John Malott is the founder and Chairman of Build Your Empire. John has built global originations doing 100’s of millions of dollars and has helped thousands of people achieve financial freedom. Recently, John Malott has joined forces with the brand-new Designer Nutrition company, ÜFORIA Science, that uses your DNA to look for variances when it comes to heart, brain, cholesterol, immune system, and much more.

Sam Bakhtiar is a doctor, CEO, author, world-class bodybuilder, and multi-millionaire entrepreneur. He runs a fitness franchising business, The Camp Transformation Center, with 110 locations and two different supplement and nutrition companies. With a Bachelor’s degree from Pennsylvania State University in sports science and life science and a doctorate from Los Angeles College of Chiropractic, Dr. Bakhtiar has helped over one hundred thousand people transform physically and mentally. He specializes in helping people get to the top 1% in any and every aspect of their life.

Ralph DiBugnara is the President of Home Qualified, a digital resource for the buyers, sellers, and realtors driving today’s millennial market. Ralph has been a major disruption in the real estate space leveraging social media to dominate the marketplace in New York and New Jersey.

Ninos Shamo is the high school student who is building an e-commerce empire built on the Shopify platform utilizing drop shipping. He has recently been featured on sites like Thrive, Disrupt and BuzzFeed for the accomplishments he has been making in the entrepreneur space.

Ben Buckwalter is an award-winning sales strategist and serial entrepreneur working with business owners, companies, and corporations to master their selling process so they can consistently magnetize ideal prospects and scale exponentially using the Infinity Sales Method™. Ben’s consulting and genius is trusted by global brands such as Bayer. He has also been featured in publications such as Entrepreneur, Disrupt, Future Sharks, and more.

Peter Voogd is the author of the best selling book 6 Months to 6 Figures, as well as the founder of The Game Changers Academy. He’s a leading authority on Gen y leadership who has trained and inspired well over 4,500 entrepreneurs with his true story of going from dead broke to a six-figure income within six months. His podcasts, videos, websites, and social media reaches more than 200,000 people monthly.

Martin Mander is a luxury and travel influencer who became an internet sensation because of his exclusive content on social media. He is an emerging name among bloggers and has many followers on Instagram. His content majorly caters to travel and lifestyle lovers.

Jason Capital was recognized as a Top 100 Entrepreneur by President Barack Obama. He is the best-selling author of Higher Status and affectionately known as “America’s High-Income Expert.” He became a self-made multimillionaire by 24. Today he is the “Success Trainer To Millions”. He is the founder and chairman of Capital Research International. For 11 years, he has served as a coach and consultant to Fortune 500 executives, professional athletes, US Marines, and A-List Celebrities.

Travis Fox is a doctor with 25 years of experience as a CEO. He is also a three-time published author and EMMY ® Award-winning producer. It is no surprise that this renowned man is also a Motivational Speaker. He is a Sports Performance & Personal Transformational teacher who has over 14,000 hours speaking on stage around the globe. His Architect of BEing ® program has helped thousands of people find their true passion.

Dean Graziosi is a multiple New York Times Best Selling Author, creator of multiple 9 figure companies and one of the best real estate educators and marketers in the world today. He has touched the lives of millions of people annually for the past 16 years through his daily television shows and social presence.

Gabriela Berrospi, also known as Gaby Wall Street, is the founder of Latino Wall Street, a movement to empower the Latino community, especially Latina women by giving them the tools and education necessary to achieve Financial Freedom. Thanks to her teachings, thousands within the Latino community have been able to trade within the stock markets, to obtain financial freedom. Originally from Peru, this powerful Latina can be seen traveling across The United States and Latin America giving conferences on the power of Wall Street and how Latinos can generate income from the stock market by trading from home.

Charlie “Rocket” Jabaley is a globally-recognized serial entrepreneur, speaker, and influencer on a mission to transform millions of people worldwide. Charlie is the former manager of 2Chainz (Grammy-nominated & winning rap artist) and the previous founder of Street Execs – an Atlanta based hip hop firm managing megastars such as Travis Porter. Charlie became a motivational speaker after being diagnosed with a brain tumor and losing over 100 pounds and taking his life into his own hands. Today, Charlie is taking the social media world by storm with his “winning streak” movement.